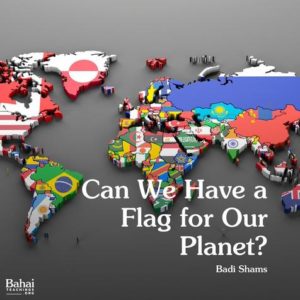 Lately I’ve been wishing that we had a flag for our planet, along with our national flags. Wouldn’t it be great to have one universal banner that offers the Earth our commitment, allegiance, respect, and love?

Actually, the topic of flags has been occupying my mind and soul for a long time, but I have to start with a disclaimer to avoid misunderstanding or accusations of being unpatriotic: I am not against any flag or country, and have nothing against loving one’s motherland or fatherland. I think that kind of patriotism shows the existence of passion, gratefulness, and loyalty.

But I do have a problem when those feelings of patriotism come at the cost of forgetting our love for our bigger home, our love for the whole Earth.

This feeling is very personal. While watching the Olympics or other sports, I sometimes feel like I have divided loyalties, since I have lived in Iran, India, China, Latin America, and Canada. Wherever I lived, I felt that it was my country, and it was home to me.

As a Baha’i, I’ve taken it as my spiritual duty to obey the laws of those countries where I lived. That experience taught me to realize the true meaning of Baha’u’llah’s powerful passage from the Baha’i writings:

“It is incumbent upon every man, in this Day, to hold fast unto whatsoever will promote the interests, and exalt the station, of all nations and just governments. … Whatsoever hath led the children of men to shun one another, and hath caused dissensions and divisions amongst them, hath, through the revelation of these words, been nullified and abolished. … It is not his to boast who loveth his country, but it is his who loveth the world …”

With that Baha’i ideal of the oneness of the entire planet, how I wish we had a flag for the whole Earth – to show our love for it, salute it and even shed tears for its sad situation. By doing that, in reality, we show love for our individual countries, too.

How I wish we would not kill in the name of a small portion of the planet, or wouldn’t hate people who live on the other side of a borderline drawn, not by God, but by man.

How I wish some of those tears shed when the national anthems are played would be shed for a flag that represented our entire planet. It saddens me to see so much love being misplaced. I fear that these strong national sentiments block our love for the wider world and humanity itself. They may stop us from expanding our minds and souls to see how we need each other, no matter which side of a border we live on.

How I wish humanity had not divided our God-given planet into different pieces, which have changed throughout human history due to conflict, violence, and bloodshed.

My feelings, like all Baha’is who consider humanity as one family and the whole Earth as one country,  try to expand our horizons beyond our national and religious allegiances. In a speech he gave in the United States in 1912, Abdu’l-Baha put it like this:

“A fundamental teaching of Baha’u’llah is the oneness of the world of humanity. Addressing mankind, He says, “Ye are all leaves of one tree and the fruits of one branch.” By this it is meant that the world of humanity is like a tree, the nations or peoples are the different limbs or branches of that tree, and the individual human creatures are as the fruits and blossoms thereof.”

There is no shame in loving our home country, but not at the cost of making that a reason to dislike or hate or make war against others from other parts of the planet.

Sadly, those ready to kill and die for their homeland ignore the needs of our real home, the Earth. Due to our narrow view of nationalism, our home is in danger of being destroyed. This statement from the Universal House of Justice, the democratically-elected administrative body of the world’s Baha’is, points out that fact:

“Unbridled nationalism, as distinguished from a sane and legitimate patriotism, must give way to a wider loyalty, to the love of humanity as a whole. Baha’u’llah’s statement is: “The earth is but one country, and mankind its citizens”. The concept of world citizenship is a direct result of the contraction of the world into a single neighbourhood through scientific advances and of the indisputable interdependence of nations. Love of all the world’s peoples does not exclude love of one’s country. The advantage of the part in a world society is best served by promoting the advantage of the whole. Current international activities in various fields which nurture mutual affection and a sense of solidarity among peoples need greatly to be increased.

Baha’is everywhere heed these words of Baha’u’llah, who wrote “… obliterate differences, and quench the flame of hatred and enmity, so that the whole earth may come to be viewed as one country.”

Humanity has come a long way. I hope that soon we will reach our collective maturity and accept that we are all citizens of mother Earth. She is our true country. Then we can direct our energies and resources to the world’s unification and healing the damages our ignorance and conflict have caused.

I hope that the next time we look at all the world’s flags proudly displayed, we notice that our planet’s flag is flying high. After all, as Abdu’l-Baha said:

The Beauty and Benefits When East and West Meet