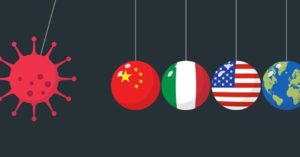 Due to the coronavirus pandemic, the world around us and our way of life has totally changed. New attitudes, and a new way of thinking, have to be adopted. What is happening has highlighted the plight of the poor and the need for the governments and other agencies to step up and do all they can to help — because this epidemic is killing more of the underprivileged and people living in poverty.

Many celebrities, sports figures, and other wealthy people have got their wake-up call and are realizing that there is more to life than accumulating wealth. Financial institutions have relaxed their lending rates and brought the credit cards interest to zero. There is a sense of unity even with some warring parties across the world. They have ceased fighting because they have found a bigger enemy in the virus. Though these changes of attitudes have not come organically, nevertheless they are welcome changes, and they make me happy in these stressful times.

It makes me happy because these are steps towards the right path. As Abdu’l-Baha, the son of Baha’u’llah, the Prophet-Founder of the Baha’i Faith said in a speech in London in 1911:

The arrangements of the circumstances of the people must be such that poverty shall disappear, and that every one as far as possible, according to his position and rank, shall be comfortable. Whilst the nobles and others in high rank are in easy circumstances, the poor also should be able to get their daily food and not be brought to the extremities of hunger. – Abdu’l-Baha, Abdu’l-Baha in London

It is not just the ordinary, and the rich who have re-examined their priorities. The leaders of all levels of government — from the local level to the international level — have started to see the world in a very different light. They’re changing their ideas and, more importantly, their vision to correspond with the new demands of communities.

“To Baha’is, the world government has been foreseen, and its need emphasized since it is an essential means of unifying humankind”

These changes have necessitated the need for doing away with the old and narrow view of the past. Many people are instead sensing a need for an international body to coordinate the efforts and resources to ensure the welfare of the whole humanity that has been so drastically affected.

To Baha’is, the world government has been foreseen, and its need emphasized since it is an essential means of unifying humankind. Baha’u’llah wrote that:

The time must come when the imperative necessity for the holding of a vast, an all-embracing assemblage of men will be universally realized. The rulers and kings of the earth must needs attend it, and, participating in its deliberations, must consider such ways and means as will lay the foundations of the world’s Great Peace amongst men. Such a peace demandeth that the Great Powers should resolve, for the sake of the tranquility of the peoples of the earth, to be fully reconciled among themselves. Should any king take up arms against another, all should unitedly arise and prevent him. If this be done, the nations of the world will no longer require any armaments, except for the purpose of preserving the security of their realms and of maintaining internal order within their territories. This will ensure the peace and composure of every people, government and nation. – Gleanings from the Writings of Baha’u’llah

The concept of world government has been envisioned by religions, philosophers, poets, writers and great enlightened men and women, but it has been a hard sell to the politicians. Recent events, however, have made both experts and seasoned politicians raise the alarm for a need for universal efforts to deal with what we are experiencing.

“We face a crisis unlike any other. To overcome it, we must unite,” António Guterres, the Secretary-General of the United Nations said in a recent statement. In addition, Guterres asked “for a global ceasefire to focus on our common enemy — the virus,” and called for collective action. “Together, we will defeat this virus and rebuild a fairer world — as united global citizens and united nations.”

Gordon Brown and Tony Blair both ex-Prime Ministers of United Kingdom have called for a global fund to fight coronavirus spread and highlighted the need for a universal body to deal with it. Brown also called for a temporary global government to manage the medical and economic crises caused by the pandemic.

“We need some sort of working executive,” Brown said. Recalling efforts to tackle the 2008 financial crisis, he added: “If I were doing it again, I would make the G20 a broader organisation because in the current circumstances you need to listen to the countries that are most affected, the countries that are making a difference and countries where there is the potential for a massive number of people to be affected — such as those in Africa.”

For me, based on the Writings of the Baha’i Faith, there is only one solution, and that is the unification of the world because united, we are stronger to face the challenges that the future has stored for us. May these challenges eventually lead us to a brighter future, As the Baha’i Writings tell us:

God grant that the people of the world may be graciously aided to preserve the light of His loving counsels within the globe of wisdom. We cherish the hope that everyone may be adorned with the vesture of true wisdom, the basis of the government of the world. – Baha’u’llah, Tablets of Baha’u’llah